Forsaken Veteran of the Drug Wars

by J.Smo of BUNKS and Bob Crain 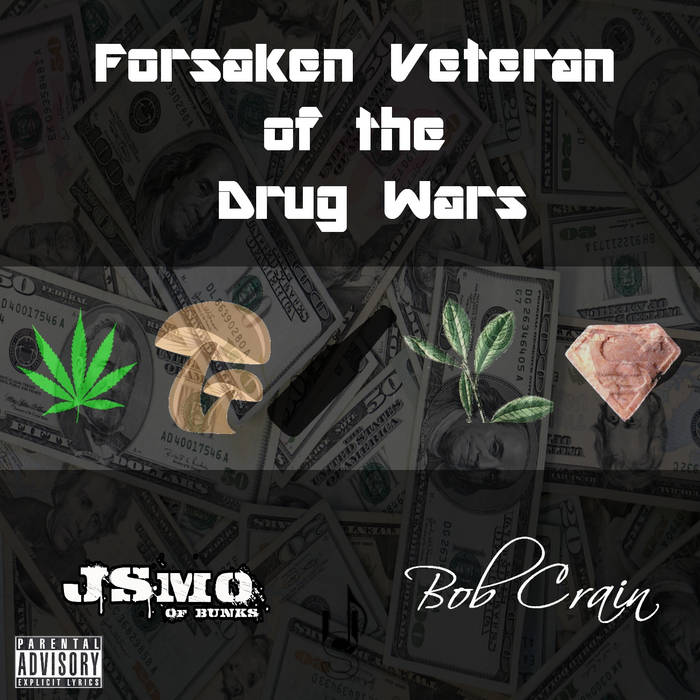 I teamed up with Bob Crain from Melbourne, Australia to create a Folk-Rap version of his song "Forsaken Veteran of the Drug Wars" from Bob's album The Hippies Were Right. The original song is included with this release.'

THE DRUG WARS, THOSE THAT SERVED AND THE HYMNS THEY MARCHED TO written by Bob Crain

Drugs, illicit, illegal, mind and mood altering drugs like it or not have been a part of modern American and worldwide culture for decades. The Drug War maybe the longest running singular war in history. There is no front, no rear, no flanks and no sides in the Drug War it is every man for themselves. The battles were fought in homes, in the streets, in the dark back alleys, the halls of justice, country and city alike. Some had uniforms and some wore colors it was hand to mind combat where camaraderie was a casualty and treachery a weapon.

It has not been fought by conventional means and unlike any other there is no rank, no battle plan, no leadership and no winners. There is but two things that are similar to other wars the collateral damage left in its wake and the anthems it produced. It is fought by individuals against each other or against themselves none the less the casualties continue to mount.

It has employed thousands paid for mostly with heartache. It has turned children in to criminals and provided an outlaw state of mind to many a solider each with their own set of rules of engagement. The Geneva Convention does not apply in the Drug War and countless jail cells and graveyards are filled to overflowing with the victims.

The Drug Wars like other wars became the mother of invention, with each individual pro or con, amateur or professional, farmer or lawyer seeking new and better means or equipment to achieve success on the battlefield.

Who knows when the first skirmishes took place but the meandering battle lines were marked out in the early nineteen-sixties. Ever moving ever changing no one knowing where or when their next battle would be fought, with whom, against what demon they would be opposed or what hymn they would march to.

One thing that has always been the banner bearer the drum and bugle core of the Drug War is the music. The Drug War has spawned innumerable songs some for, some against, and some because. Yes the fife and drum players also fought and died, their tombstones sometimes bear the names of the famous and the revered battlers and sometimes they are unmarked … tombs of the unknown, all Forsaken Veterans of the Drug Wars.

Bob Crain had no prior knowledge of which battles J. Smo had participated in and J. had no knowledge of Bob’s marches, they fought in different eras. There is one thing for sure though they are both decorated veterans of the Drug War in some way.

Bob’s chronicle picked up the War in the early Sixties and it carried through blood sweat and fears of the Seventies and in to the Eighties…when many of the early riders in the Drug War Calvary put the VW Van out to pasture and held out hoping against hope for an armistice. It had seemed like there was some structure back then, some rank and file a brotherhood if you will, but that all fell apart under the influence of hard drugs and big bucks.

The Drug War continued no end in sight J. in his War Correspondent guise advanced the reporting from the mid ‘80s. Through the “just say no” front to the crack house massacres, to glorified chemists on TV and here we stand…no end in sight.

Bob’s historical recollection though not autobiographical is clearly tainted with firsthand knowledge and battle front experience. He presents his musical narrative in the format of the day, Folk Rock. The blend of music and message which prevailed as “heads” gathered in candlelit rooms where the smell of grass and incense mixed. The sound arose from the parks, around campfires, coffee shops, the beachheads and the fields of Woodstock. Written with the processor of the time a 1973 Martin D-28, just three chords was all it would take.

J. extends the story in the genre of the millennium Hip Hop Rap but it didn’t tell the whole story and he sought historical background as a good War Correspondent does. He laid out the current details in a language that would be universally understood by the those who would take heed of this Drug War as the casualties continued to mount … including that first casualty of war Truth. Sound journalism now computer processed, a trade at which J. is a journeyman, would carry his hard hitting, straight to the face, bare naked facts report.

So now you have the whole story, five decades of the Drug War rolled in to four minutes and forty five seconds of Folk Rap Fusion … a new composition a blending of old and new … but the Drug War continues unabated, the casualties mount and the anthems continue to be sung.

What brought these two veterans and their respective genres together was passion and a desire to deliver the message that the Drug War, a war of individual attrition, continues…and there is no victory in sight.

The Folk/Rap Remix of The Forsaken Veterans Of The Drug Wars a compilation by J.Smo and Bob Crain was the brainchild of J.Smo who determined that my Folk recollection and his Rap production were the perfect mates to deliver the message to young and old. J. remixed, produced, recorded and mastered the finished Remix product.

written and performed by J.Smo of BUNKS and Bob Crain
remix produced by J.Smo
remix recorded at One Mic Studios, Sacramento, California

We are a hip hop collective from Manchester, Tennessee that has been releasing music since 1999. J.Smo is in Sacramento working with UL Sounds and MPC Recording Company. New and exclusive projects are released here first. ... more

era of the civil rights,
era of the Hippies' height,
Black Panthers in their prime, but tell me...
where'd they go when crack arrived?
I don't know...
underground, infiltrated, hmmm...
power of the people, nah the system can't escape,
got to hold us down, yes the fire they have to tame it,
best way to do it? declare a Drug War,
find all the opiates, send to home shores,
find all the coca, damn it! we want more,
now we all strung out on God's Bathroom Floor,
content with being numb, too lazy to add the sums,
counterculture's now a niche for advertisements,
and you could be cool if their junk you would buy it,
but propaganda do we see?
cause it's propaganda we believe.

now the private prisons banking profits,
off of these drugs that we got in our pockets,
use entertainment to sell us the sex,
yeah, we want glitz and glam, hella violence, nothing else,
you know we Breaking Bad when we so far left,
your favorite TV show's about a teacher cooking meth,
see the cancer spread, evil breaks bread,
with so much style we easily mislead,
from the dimes to quarters to the ounces to the pounds,
from the fiend to the snitch to the cops knocking loud,
to the bribes that they offer to help take him down,
the big bad wolf, a pawn in their game now...
to the judges in the court rooms closing the case,
to the hustlers in the streets trying to feed their face,
to the mother and the newborn running in place,
anything for escape, anything for escape.

it was all about the green, then came the white,
then came the skittles, then came the knife,
then came lines of powder on the table,
son of a preacher man, running from the labels.
surrounded by fiends, it was time to stack dough,
backed by some thugs who would put you on the flo',
flipped them first sacks until they turned to a brick,
in my mama's car steady making those trips,
I-24, I-40 to the East,
praying to the gods I don't see no police,
hold my son close when I get back home,
put him to the bed and then the party was on,
dollas, dollas, dollas, dreams, dreams, dreams,
forsaken drug war veteran turning some cream,
a cog in a system so cold, so mean,
they making so much money just off the legal fees.

the volcanic islands, cheap snow made its way,
the captain now fueled on cocaine and Tanqueray,
the war was still raging but now between themselves,
they lost the brotherhood, but the money was swell,
the captain look around and it seemed all was lost,
his crew held together but at what costs,
it looked as if the young mind army was defeated,
old ways of treachery saw it mostly depelted,
the last battle lost in '75,
it just came down to staying alive,
the captain kept fighting, sometimes hand to hand,
nothing left of his men but a small trusty band,
hard drugs and money replaced acid and weed,
the good bush so expensive, just fair market greed,
the captain stood alone, the flower children all gone,
it was hard to take what had become of this song.